It's a jungle out there!

The truth is that it is not always easy to know who you can trust, all we can do is use our common sense and our knowledge of the world to make judgements on information. Although Google (and other search engines like Yahoo and Bing) rank the results with most relevant links first, we still need to stop and think about why results are there.

Government departments, educational institutions and charitable groups are examples of organisations that create websites to inform the public and can generally be relied on to be un-biased and useful sources. The easiest way improve the quality of your search results is to scan the web address/URL for clues as to the creator. A Queensland government report or website (recognise it in the result list by noticing qld.gov.au in the address bar)  would be a useful source if your assignment is looking at social conditions in Queensland. Educational institutions in Australia all have edu.au in the address. In fact in Australia only defined organisations can use the edu.au, gov.au and csiro.au domain names.  Also Australian sites that wish to use a .com.au address must also be a registered business in Australia. It is important to note these type of rules may not apply for other countries.

TAKE HOME TIP: Being able to recognise the elements of a domain name (the main section of the web address or URL), such as qld.gov.au will help you to recognise good quality information.

The opposite column describes sites that might fool you, (if you are missing the joke!). There are also sites created intentionally to fool you. The Australian government website scamwatch.gov.au is an excellent place to stay aware of these type of sites.

Obvious clues are sites operating in Australia without the com.au domain - legitimate site can use a simple .com but so can shonky operators who are trying to fool you.

This is a broader issue for everyone, not just when you are looking for online information for assignments, it pays to raise your knowledge of all informtion on the web so you keep yourself safe at uni and in the rest of your life.

Satire, Parody and being fooled on the web

For people that do not spend a lot of time on the web, or do not have a strong knowledge of 'hard' news sites  it can be quite easy to be taken in by intentional satire or parody news stories. Websites like The Onion, although it started in 1996 still regularly fools unwitting readers into thinking they are reading factual news.

A well known instance of the Onion fooling many people was at the height of the Harry Potter books popularity (2000). The Onion published a satirical article suggesting that the Harry Potter books had sparked a rise in Satanism among children. Although some Christians expressed genuine concern on this issue, the satirical article was unwittingly shared among many people who found it very disturbing.  You can read about the whole incident on Snopes.com a website that verifies or debunks urban legends and information circulating around the web.

If you think times have moved on and people are more internet savvy than they used to be, you only need to look at this article to see that it still happens regularly.

It can be harder to read some of the cues that a website might give that it is not totally serious when you are seeing news articles in a friends facebook feed and assuming that if it's from someone you know you can trust it. Perhaps they were fooled too, or maybe they are sharing because they found it amusing. The website Literally Unbelievable shares examples of people taking satirical Onion articles seriously.

Can you believe it? 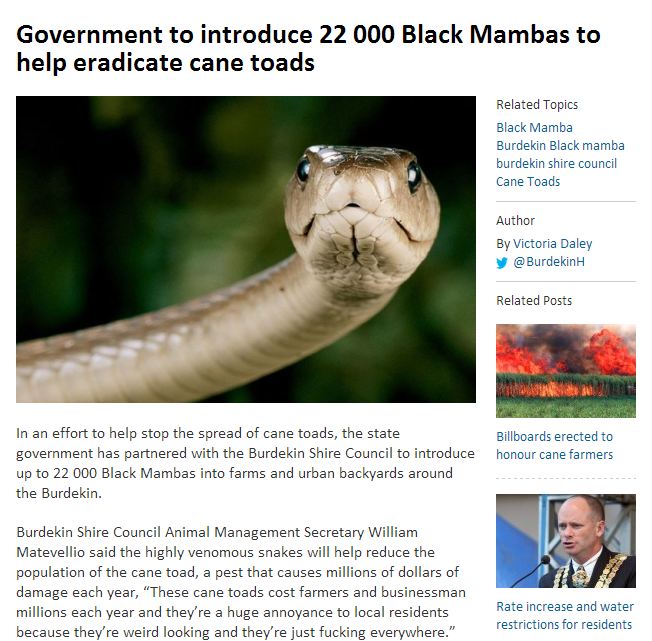