This guide will help you identify and use the correct referencing style to ensure clear & consistent presentation of written material.

In-text citation styles differ depending on the style. This page provides an overview of the main types of in-text citations and how to cite them correctly.  Look for more specific information for your style on the tabs above or the information to the right. 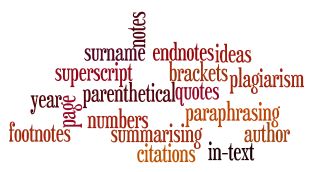 This may vary from style to style but basically all styles deal similarly with short and long quotations.

This is reflected in the idea that “schools of thought, methodologies and research techniques reflect their social origins” (Hayes, 1995, p.53)

If the material is longer than 4 lines (about 40 words) then it should be set of in an indented block.

When you cite (identify) references in the text of your report or essay using an author-date referencing style  like APA or Harvard you should include the following pieces of information.

Examples of In Text Referencing:

Do I include page numbers in the in-text citation?

When you use others' ideas in your paper, you should credit them with an in-text citation. Several different systems of citation are in use in various academic communities (such as footnotes and endnotes), but APA Style uses a kind of parenthetical referencing called the author–date system.

As the name author–date system implies, APA Style in-text citations include the author and date, either both inside parentheses or with the author names in running text and the date in parentheses. Here are two examples:

The "and" in Smith and Wexwood is written as an ampersand (&) inside parentheses and as the word and outside of parentheses, as shown in the examples above.

See the full post below including the handy table that shows what substitutions to make for in-text citations when some key information is missing.

For MLA when you quote or paraphrase a specific portion of a text in a source, give enough information, most typically the author's last name and the page number, to identify the exact location of the borrowed material.

Other systems only include numbers in the text of the essay rather than parenthetical information.  The Chicago, Turabian and Vancouver styles follow this type of note system. To acknowledge a source in your paper, place a superscript number (in some cases numbers in brackets are acceptable) immediately after the end punctuation of a sentence containing the quotation, paraphrase, or summary.  A footnote or endnote would then appear at the bottom of the relevant page of the essay. In some cases footnotes are not used but the reference list is numbered.

This argument has been developed elsewhere.1

For Chicago (using the footnotes version), the page numbers are not included in the text but in the footnotes.

For Vancouver, page numbers for direct quotes are included next to the number in text (but it is considered better to avoid the need for page numbers):

This argument has been developed elsewhere.1(p21)