This Guide contains or links to guidance for the main referencing styles used at JCU, and general information about referencing

5 Steps to a great title

The title of your paper is incredibly important. A paper’s title not only sets readers’ expectations for what the paper will be about but may also determine whether it gets read at all—or with how much trepidation versus excitement it is greeted.

Below are five general principles that, if followed, will produce a great title:

If you've ever been confused by what a running head is or wondered how to format one for an APA Style paper, read on.

A running head is a short title (50 characters or fewer, including spaces) that appears at the top of every page of your paper (insert Header for Microsoft Word). The running head identifies the pages for the reader in case they get separated, and if you submit your paper for publication, it does this while preserving your anonymity during the review process. In published articles it also identifies the article for the reader at a glance.

The running head (along with the page numbers) appears in the header of every page (the header by nature is situated within the top margin of your paper; all the margins themselves should be set to 2.54cm). Type it in all capital letters, make sure it is no longer than 50 characters (including spaces), and left justify it. Then add your page numbers, right justified.

"The prefered typeface for APA publications is Times New Roman, with a 12-point font size" (p. 228).

"Double-space between all text lines of the manuscript. Double-space after every line in the title, headings, footnotes, quotations, references, and figure captions...never use single-spacing or one-and-a-half spacing except in tables or figures" (p. 229).

"APA requires that the reference list be double-spaced and that the entries have a hanging indent" (p.180).
"Arrange entries in alphabetical order by the surname of the first author followed by initials of the author's given name" (p.181).

For Vancouver, references are listed according to the allocated number it is referred to in the text.

For APA, MLA and Harvard Styles, the list is arranged in alphabetical order of authors' surnames 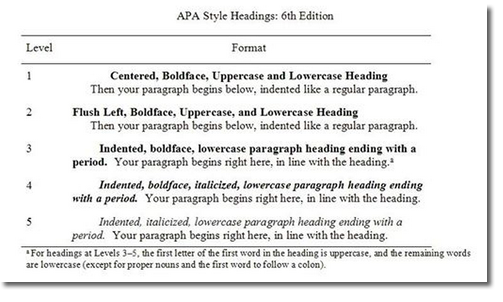 The above table from the Publication Manual of the American Psychological Association (2010, p.62) clearing outlines the style required for formatting using APA style.  See the full entry from the APA blog below.