The decision to initiate the legal case that was to become so well known, was made at the Land Rights and the Future of Australian Race Relations Conference held at the Douglas campus of JCU.

The political activism of the James Cook University Student Union can in large part be credited to the Culture and Race Relations course that had been running since 1978. Noel Loos had introduced this course at the Townsville College of Advanced Education, later taken over by the JCU School of Education (Campbell, 1983; McDonald, 1987). The course invited in local activists as guest speakers, including Eddie Mabo. Professor Henry Reynolds has commented that it was this environment that fostered the students activism and in particular the interaction with Koiki who also worked at the campus and was friendly with students. The guests they invited to the Townsville Conference brought together the people with the will to change the law and the people who could make it happen.

The conference was opened by the Mayor of Townsville and began with a history of white settlement session with two talks by Henry Reynolds and Noel Loos. The program included many notable speakers including Mabo himself who spoke on the Significance of land right rights for Torres Strait Islanders. Noni Sharp, historian also spoke on the topic of Islanders and land rights.  The man who launched the Aboriginal Treaty Committee in 1979,  Dr H.C. “Nugget” Coombs spoke on The Case for a Treaty.  Garth Nettheim spoke in several sessions on government policy and possibilities for legal change. Barbara Hocking, Barrister and Greg McIntyre of the Cairns Aboriginal Legal Service, both spoke at the session titled A High Court Test Case. Barbara’s talk Is Might Right? An Argument for the Recognition of Traditional Aboriginal Title to Land in the Australian Courts essentially set out a legal framework for the case to come. Greg McIntyre spoke of Aboriginal land rights at common law.

The program allowed opportunities to meet and talk with Koiki and other Mer island land rights activists, the result being Eddie Mabo, Flo Kennedy and David Passi from Mer had backing from lawyers, Greg McIntyre, Barbara Hocking and Garth Nettheim and with the agreement of Nonie Sharp, historian and Dr Coombs agreed they would mount a case. 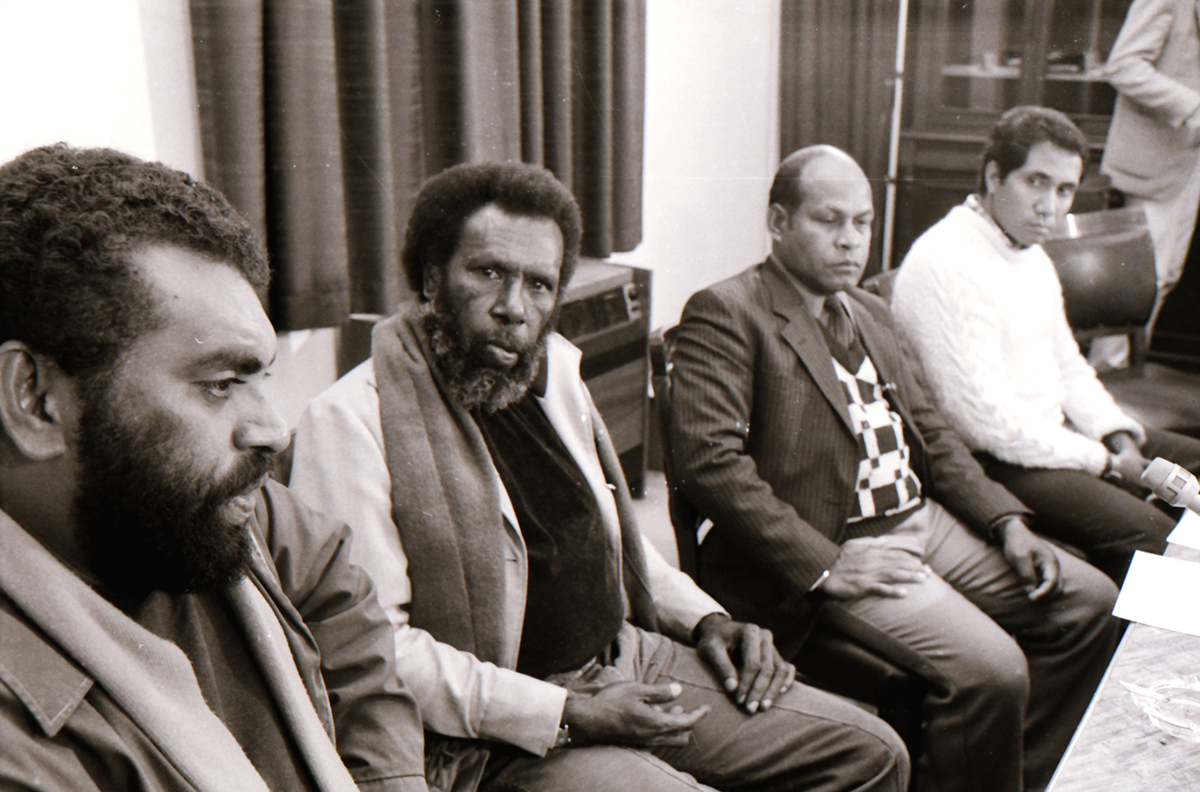 Having engaged Greg McIntyre from the Cairns Aboriginal Legal Service as their solicitor and barrister Barbara Hocking soon after the Townsville Conference the legal team was gradually recruited to represent the Meriam plaintiffs. Greg then engaged Ron Castan QC  to argue the case for the plaintiffs and Bryan Keon-Cohen was appointed as another junior barrister with Barbara.

This video depicts Eddie Koiki Mabo delivering a guest lecture about the Torres Strait Islander community to education students from the Townsville College of Advanced Education in the Race and Culture course. The video is a digitised version of the lecture released as part of JCU Library's 50 Treasures: Celebrating 50 Years of JCU project. 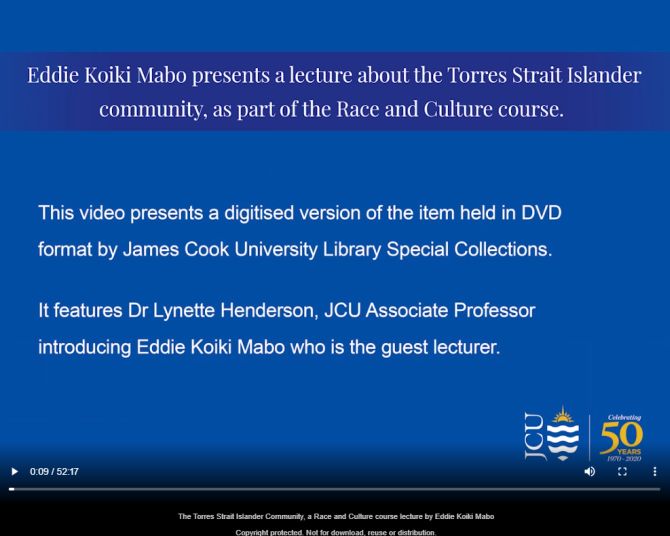 Koiki writes a paper on the music and related history and culture of the Torres Strait for Black Voices, a journal for Australian Aboriginal and Islander peoples, published by the Department of Social and Cultural Studies in Education, James Cook University (Mabo, 1984).

The Queensland Coast Islands Declaratory Act 1985 (Qld) is introduced. The Act states that when the Queensland Government became sovereign of the territory in 1879, Torres Strait Islanders lost any claim they had to their land.

The High Court rules in Mabo No 1 that the 1985 Act is inconsistent with the Racial Discrimination Act 1975 (Cth). The case continues, and the plaintiffs are required to prove their traditional land ownership. 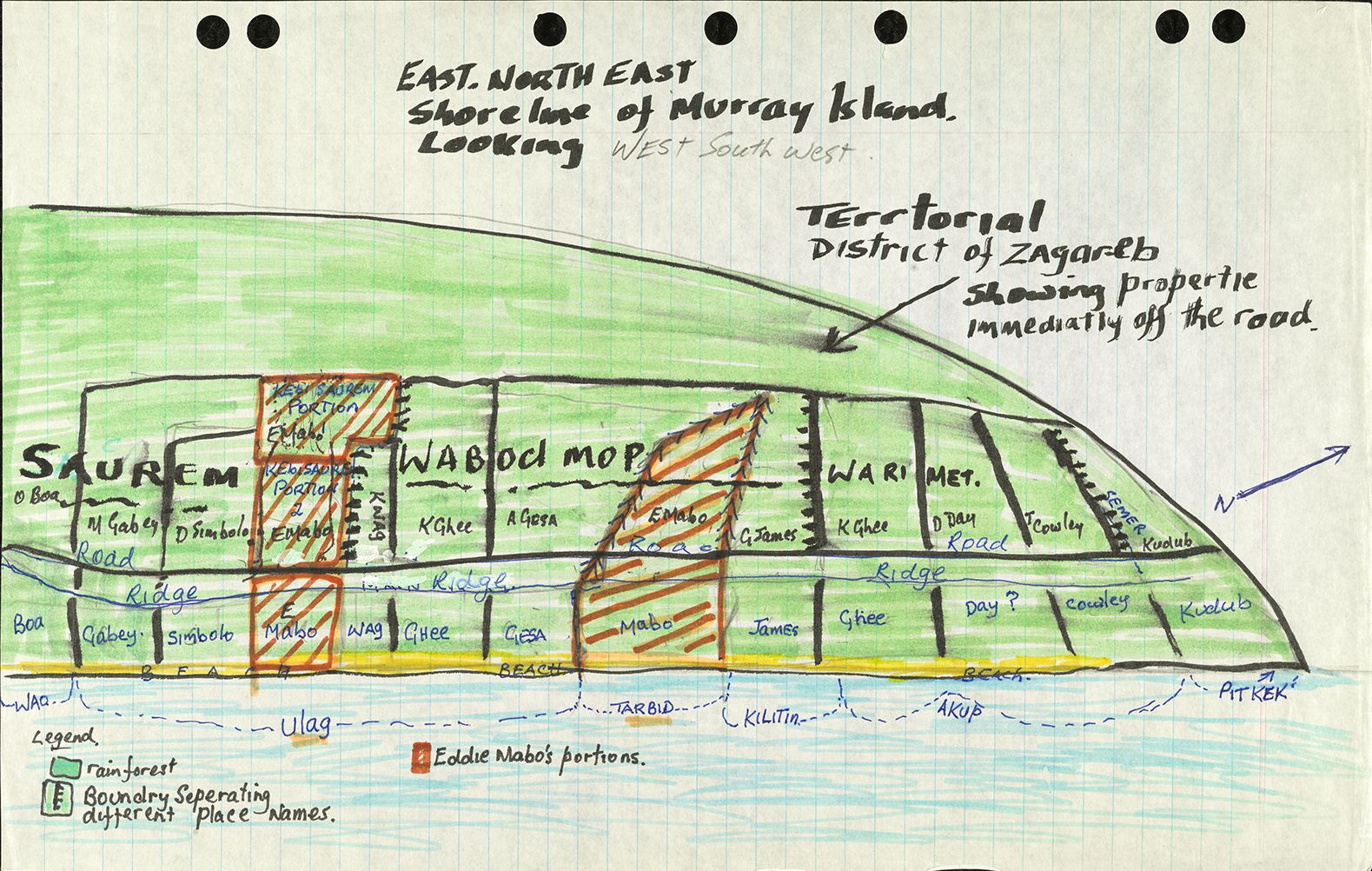